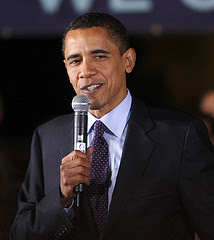 Raise your voice for justice! Obama’s transition team is preparing for the new administration in January, and they want you to share your vision with them.

On the official transition team website, you can submit your ideas about issues the Obama-Biden administration should tackle and how to solve them. You can even upload a photo or a video.

Click here to tell Obama what changes you’d like to see in the upcoming administration. Consider mentioning that you’re a Unitarian Universalist, a person of faith.

Need ideas? Check out the UUA Washington Office for Advocacy’s Legislative Objectives for the 111th Congress: 2009 – 2010.

Need an example? Here’s my first comment to Obama:

I am thrilled about the upcoming Obama-Biden administration, but I am deeply disappointed to see no mention of BGLT rights in the transition team webpages. Especially after the devastating blows dealt to the BGLT community by ballot measures in California, Florida, Arkansas, and Arizona, it is more important than ever to express firm support for the rights of same-sex couples to marry and to adopt children. I urge you to make supporting the rights of BGLT people a prominent feature of your agenda and your administration. Thank you, and congratulations!

I’m planning to submit more comments asking for support of the Gulf Coast Civic Works Act, increased visibility of American Indian justice issues, green jobs, a compassionate path to legalization for undocumented immigrants, and an expansion of visas that allow unskilled workers to legally immigrate to the United Stated permanently.

We may not get everything we propose–but it can’t hurt to ask. And now, more than ever, is the moment to dream big.