Bisexual, Gay, Lesbian and Transgender (BGLT) communities in Washington, DC and around the world are holding Pride Celebrations this month and throughout the Summer and Fall. On June 9th, members of over 20 different religious communities and faith-based organizations came together for the annual Pride Week Interfaith Service organized by the Celebration of the Spirit Coalition. The gathering included beautiful and heartfelt expressions of the love and inclusiveness inherent in many diverse religious traditions. Participants were identified as Muslim, Christian, Jewish, Bapitist, Buddhist and Wiccan, to name just a few. UU representatives included ministers and members from All Souls Church, Unitarian; Cedar Lane Unitarian Universalist Church and the Universalist National Memorial Church. Capital Pride activities continue in DC this weekend with a parade on Saturday evening and a festival on Sunday.

The theme of the interfaith service this year examined the past, present and future of the struggle for rights and recognition for people whose gender identities and/or expressions or sexual orientations do not follow the heterosexual norm in this country. Participants honored our ancestors and those who did this work before us while we looked to the next generation for renewed strength and spiritual activism that will carry us into the next century.

The modern BGLT rights movement has roots in the work of activists in the 1950s and 60s, but is most often traced back to the Stonewall riots in New York in June 1969, where protesters confronted police who were conducting unconstitutional raids in bars. The yearly parade that commemorated this incident sparked a national grassroots movement, and Pride is now celebrated in many countries around the world. The celebrations aim to increase the visibility of BGLT people in their communities and to give all who participate a chance to come together in solidarity to combat oppression.

We salute President Obama’s efforts to further civil rights gains for BGLT persons internationally as well as within the United States. We hope sincerely that he works closely with Congress to keep his promises of finding a way to repeal “Don’t Ask, Don’t Tell,” to eliminate workplace discrimination based on sexual orientation and gender identity and to recognize and protect same sex couples and their rights.

The Unitarian Universalist Association will continue to express our vision of a society where no one is terrorized, excluded or marginalized based on their identity or its expression. The UUA Washington Office for Advocacy and its staff will keep working to ensure that the laws and policies of this land are crafted in the spirit of respect for the inherent worth and dignity of every person. 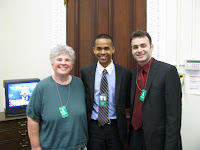 The day after the ruling upholding Proposition 8 came down from the California Supreme Court, I visited the White House for the first time since coming to UUA Washington Office over three years ago.  Rev. Meg Riley, Director of UUA’s Advocacy and Witness Programs (my boss) accompanied me.  We met with Paul Monteiro, the White House Office of Public Engagement’s Associate Director charged with creating partnerships with the faith community.  The meeting covered a lot of ground, but we began by clearly communicating our movement’s commitment to gay, lesbian, bisexual, and transgender rights.  We spoke about the work of the UU state advocacy networks, the UUA office of BGLT concerns, and, most importantly, our many congregations.

I shared the UUA’s Legislative Objectives for the 111th Congress and highlighted the report card we issued on the Administration’s first 100 days.  We also discussed the OWL curriculum and the advocacy work many UUs are doing to support comprehensive sex-ed.  I even brought my computer and 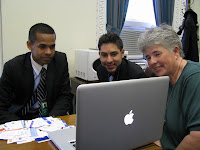 showed him the promotion video I made for the Sexuality Education Advocacy Training (SEAT).  I wanted him to see the faces and hear the voices of the young people who come all the way to  D.C. to lobby for comprehensive sex-ed.
We then discussed the role that Unitarian Universalism can play in the many important challenges our country is facing. We spoke of Van Jones’ Ware Lecture, and how it sparked a realization that Unitarian Universalism needs to shift from a movement focused on protesting to taking up the hard work of governing. Monteiro appreciated this shift and was clear that he felt religious groups were most powerful when we use our religious voice and moral authority.  Monteiro also lifted up the power of unlikely groups coming together to create change in their communities and said he is constantly searching for such stories.  So if you have any let me know (agerhardstein@uua.org).

Monteiro was already very familiar with Unitarian Universalism, having worked closely with many UU volunteers in Iowa during the campaign.  He was receptive to our legislative objectives and our commitment to work in community partnerships and we are in the process of scheduling further meetings and sharing more information. This meeting felt like a genuine  step forward in addressing the many issues Unitarian Universalists work and pray for every day.  While the UUA will not always walk side-by-side with the White House, I am convinced that we are both committed to sharing our respective directions and understanding what drives us forward.