On Tuesday, we offered a round-up of articles on housing recovery in the Gulf Coast in advance of Wednesday morning’s Congressional hearing on FEMA housing. Last night, the Associated Press posted coverage of the hearing, which began with the words: “The government could end up repeating mistakes seen after Hurricane Katrina without a better plan for housing people after a catastrophe . . . .”

One of the main problems that FEMA officials pointed out included that the housing they provide is meant to be temporary– and without federal or state governments stepping in to facilitate peoples’ return to permanent housing, FEMA is having to provide a service it simply isn’t equipped to provide.

“Our business is sheltering … we do not have the solution for how we re-establish housing stock,” said Craig Fugate, Director of FEMA (Federal Emergency Management Agency).

FEMA is also restricted from spending a significant amount to repair permanent housing. According to Richard Skinner, FEMA’s Inspector General, FEMA is “hamstrung by federal laws limiting its role in the broader rebuilding effort.”

FEMA surely has its share of responsibility in the problems that have followed Katrina and Rita, but their testimony at yesterday’s hearing makes it clear that rebuilding and long-term recovery is a greater task than they were ever equipped to handle.

The House Committee on Homeland Security will hold a hearing on FEMA Housing: An Examination of Current Problems and Innovative Solutions tomorrow, Wednesday July 8, at 10 am EST in Washington, D.C. The purpose of the hearing is to receive testimony on FEMA’s strategy and plans to provide displaced individuals interim housing options in the wake of future catastrophes. Footage will be available on the House website, where an icon for live/recorded video of the hearing is located at the bottom of this page.

With regard to housing recovery in the Gulf Coast generally, a coalition partner at the National Low-Income Housing Coalition compiled this list of recent news articles:

· FEMA estimates that 1,800 individuals or families in Montgomery County, Texas, with unmet needs after Hurricane Ike just began to provide the needed resources.

· The City of Galveston expects to get the money for its housing recovery plan by August. Unfortunately there are lingering concerns that many people who could have received the assistance already rebuilt their homes, through a variety of resources, and will now not qualify for the funds.

· A Biloxi news piece talks about the progress of two rebuilding programs, “My Home My Coast’ at Gulf Coast Renaissance Corp and ‘Coming Home Collaborative’ with the Gulf Coast Community Foundation. The two programs combined have already received more than 5,000 applications.

· George County supervisors approved “a comprehensive plan … to guide development for the next two decades” last week. The process to develop the plan began after Katrina when officials learning they could not stop FEMA trailer parks from being located in areas that they or neighbors did not want them.

· The Louisiana Weekly reports that HANO extended the deadline for people on the pre-Katrina public housing waiting list to respond to requests as to whether they would like to stay on the list. The deadline for such notification had been last Friday, June 26, but has been extended to this Friday, July 3.

· More construction begins on homes to be built on former C.J. Peete site in New Orleans.

· This Times-Picayune piece talks about the progress on the long-delayed Louisiana Katrina cottages.

· Footage of Bill Johnson, ADECA, testifying before the House Financial Services Committee concerning the Economic Disaster Area Act of 2009, which proposes a new set-aside of CDBG funds for states declared economic disaster areas by the President. Around the 59 minute mark, Rep. Waters responds to Johnson’s ask for more disaster CDBG funds agreeably and, though she doesn’t offer anything concrete, suggests that the committee revisit the unmet Gulf Coast housing needs and what has happened with previous funding.

· Recently the UN special rapporteur on racism spoke before the UN Humans Rights Council about recommendations for how the US can tackle ongoing racial discrimination. Discriminatory treatment of people affected by Katrina, especially with regard to permanent housing situations, was included in that testimony. See the UN recommendations.

· An MIT team transformed a FEMA travel trailer into a mobile community garden. The “Armadillo” is now on a cross country trip. 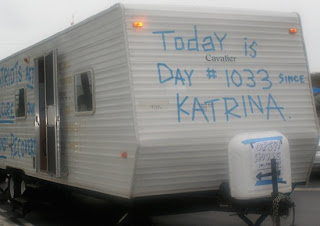 Just when you think things couldn’t get worse in New Orleans, and when federal legislation for recovery in the Gulf Coast has finally been introduced, FEMA announces trailer evictions.
Please read the post below from the Katrina Information Network. And if you haven’t already, please urge your Representative to co-sponsor the Gulf Coast Civic Works Act through the UUA’s online action campaign and/or by collecting signatures from your congregation to mail to your Representative.
FEMA has announced that tomorrow, on May 30, 2009, it will act to evict thousands of residents from FEMA trailers in the Gulf States in spite of the fact that these residents have had limited support and lots of barriers in their efforts to find permanent housing. Please act now to stop this travesty.
Mr. Ernest Hammond is a case in point. Hammond, a 70 year old, former New Orleans homeowner, could not get financial help from Louisiana’s Road Home program for his triplex since the housing structure was ineligible for a grant. To help himself, Mr. Hammond has collected almost $10,000 in aluminum cans but that won’t even begin to cover the costs to rebuild his home in the 7th Ward. His FEMA trailer is keeping him off the street while he struggles to return home.
Mr. Hammond is 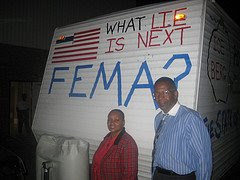 one of thousands of families living in FEMA trailers because they are either caught in a web of deeply flawed, bureaucratic home repair grant programs, a victim of all too rampant contractor fraud or simply priced out of a rising rental markets where affordable housing is being demolished or gentrified.

No one chooses to live in a FEMA trailer, but it is better than no home at all. Evicting residents without providing access to safe, permanent housing will only lead to homelessness and further destabilize families.
Please take a minute to click and send an email or make a call to let the Administration know that evictions are a bad idea.

Say NO to FEMA’s decision to forcibly evict residents from trailers!

Hold our elected leaders to their promise of Gulf Region recovery, and de 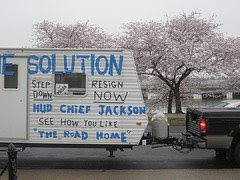 mand equal protection under the same human rights policy that the U.S. government applies to displaced persons in other countries.

Tell FEMA to provide an extension to all homeowners and renters living in FEMA trailers to allow them sufficient time to repair their homes and/or find alternative housing.

Call the Obama Administration and FEMA to demand action now! Tell our government not to carry forward yesterday’s short-sighted policies and to apply the same human rights standards to displaced persons in the Gulf States. Demand a stop to the FEMA trailer deadline and the guarantee of safe, permanent housing in the Gulf Region. 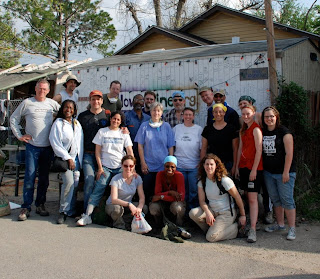