After graduating from Smith College with a degree in Economics and a minor in Environmental Science and Policy, I joined AmeriCorps*VISTA (Volunteers In Service To America) in Lawrence, MA, as a Healthy Communities VISTA with Groundwork Lawrence. I managed some of our community food programs and worked with youth on gardening and healthy eating initiatives. I worked on our local community gardens program enabling people to safely grow their own food in an urban, industrial city, and the Community Supported Agriculture (CSA) program, in which people could “subscribe” to get farm shares each week from a nearby farm.

Many people in Lawrence, like many communities in need, have limited access to fresh produce. People with lower incomes are more likely to have health problems like obesity and diabetes, diseases directly related to food. If fresh fruits and vegetables aren’t easily accessible, or if the only ones you can afford are poor quality, how can you expect anyone to want to eat them? By providing opportunities for people to purchase fresh, locally-grown produce with food stamps and at subsidized rates, by giving people an opportunity to grow their own food in uncontaminated soil, by teaching young people how to cook with fresh fruits and vegetables–these things bring us one step closer to food justice. Click here to learn more about “Ethical Eating,” the 2008-2012 Congregational Study/Action Issue (CSAI) of the Unitarian Universalist Association of Congregations.

The American Clean Energy and Security Act (ACES) passed in the House, but only narrowly (219-212). We need to make sure that the Senate also includes provisions for providing employment and training opportunities in green construction in communities who have traditionally been left behind and funding to the Green Jobs Act. Workers affected the worst by the recession and by environmental degradation would get the training and support they need for green-collar jobs. The most important thing you can do right now is to contact your senators and get them to pass a strong climate change bill.

The Advocacy and Witness team has ten members in a total of three cities ranging from Boston, MA to Minneapolis, MN and Washington, DC. Over half of our team members have gardens that they lovingly tend.

Adam: Plant a row of basil, there is nothing like frozen fresh pesto to get you through the winter.

Alex: I love Okra! I think it is probably due to some latent Southern gene left from my dustbowler ancestors. But finding good okra in the grocery store is an Arthurian quest. And getting it at the farmer’s market requires deep pockets. Even then, it as a tendency to be a bit slimy. But I have discovered that growing okra is really easy. Our okra at home grows fast and tall. Last year’s plants grew taller than our corn. It has beautiful flowers. And its production rate is outstanding! I felt like every time I cut off a fruit, a flower popped up the very next day. I also realized why farmer’s don’t like to grow it. It takes some space, it is covered with tiny needle like spines. And the ripening period is a little bit fickle. But with a little bit of vigilance, a pair of gloves, and a good pair of garden shears, you will be up to your nose in delicious, fresh, not-at-all slimy okra. I really prefer the Star of David okra from Seed Savers Exchange.

Eric:
Our vegetable garden doesn’t have anything very exotic, but a highlight of our summer will be the first chance to grill corn, zucchini, and yellow squash and serve it with a salad of mixed greens, cucumbers, tomatoes and onions. We’re going to try to prevent our spinach and cilantro from “bolting” early as they did last year. And, we’re hopeful that the long beans and peas get along well together in their raised bed this year. By early August the eggplants should be lovely to look at and make for a tasty baba ghanoush. The first crop of strawberries are probably only a week away from harvesting, various other berries a month or so later. And, if the garden gods are kind to us, the watermelons will get enough sunshine and rain to put big smiles on the faces of family and friends by the end of the summer.

Inch by inch, row by row…

Kat: My summer garden pick, arugula. And I feel compelled to state that I have drooled over arugula long before I ever heard of Barack Obama or the fact that it is his favorite leafy green. (Obama’s left-handedness and love for arugula are two things that the president and I share in common.) While its pungent, peppery goodness kicks up the flavor of salads, it is equally good as a pizza topping.

Lisa: My favorite summer vegetable is rhubarb, which is very healthy, and which goes best with several cups of vegan butter and sugar.

Meg: New Zealand Spinach! That’s my favorite vegetable to plant! Unlike regular spinach, it will keep you in green, leafy, vitamin rich spinach for the entire summer! And it is a bit bulkier so it doesn’t cook down as dramatically as regular spinach either. It’s not as good to eat raw as regular spinach, but it is fantastic cooked!

Orelia: As far as vegetable plants go, there’s nothing I love more than a plate of freshly picked cucumbers and tomatoes covered in salt on a hot summer day. Datura (moonflowers) are my favorite summer scent, especially since they open and are most fragrant at dusk.

Last summer, the General Assembly of the Unitarian Universalist Association voted in our annual meeting to devote four years of study and action to the theme of Ethical Eating.

Congregations, communities and individual UUs all over the United States are asking questions about food. Where does it come from? Who grows it? Who gets access and how? How do we eat? How do we cook? How do we share the bounty? What happens when people don’t have access to food? Vegan or compassionate omnivore? Is it better to eat locally or organically?

Which brings me back to the question posed in the title of this post: What do Michelle Obama and I have in co 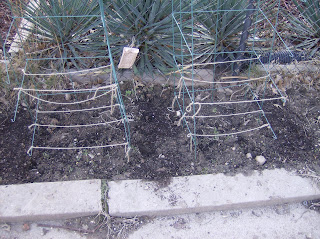 mmon? Not a whole lot. But we do have yards at our homes. And in those yards, we will grow vegetables.

On Tuesday, Mrs. Obama announced that the groundskeepers of the White House compound will tear up a small portion of the lawn to grow an organic vegetable garden. Students from nearby Bancroft Elementary School will help break ground today.

This is quite the success for home gardeners everywhere who have been lobbying the President and First Lady for a kitchen garden at the White House. Famed Chef Alice Waters, whose restaurant Chez Panisse specializes in locally grown and sustainable food, was thrilled. Chef Waters was quoted by the AP saying, 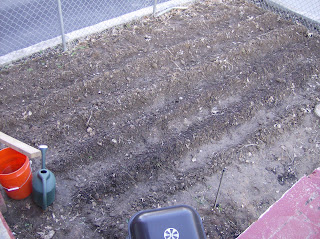 It just tells you that this country cares about people’s good health and about the care of the land. To have this sort of ‘victory’ garden, this message goes out that everyone can grow a garden and have free food.

This is not the first time the White House has grown its own. During WWII, First Lady Eleanor Roosevelt grew a victory garden on the South Lawn. And before that, when the country was more agrarian, the White House grew much of its own food, including raising sheep that grazed on the White House Lawn.

Whether you call it urban farming, kitchen gardening, or victory gardening, growing your own fruits and vegetables is an incredibly rewarding experience. According to the New York Times, the White House Vegetable Garden will only cost $200 for compost and seeds. But the results will be worth a lot more than that. Fresh produce to be used in the White House kitchen, or my own, is a time and money saver. And when the bounty of summer comes, I like to give away my surplus vegetables to my neighbors.

In my neighborhood, the nearest food sources are bodegas, conveniences marts and corner stores. Here, you can occasionally find a hard, mealy, tomato or a soft, eye-ridden potato. Most everything else is frozen, bagged or in cans–high in salt, preservatives and sugar. The nearest grocery stores are a twenty minute walk. And the nearest farmer’s market is two neighborhoods over, a forty-five walk. This is difficult for folks who may be single parents, elderly, or on low incomes. 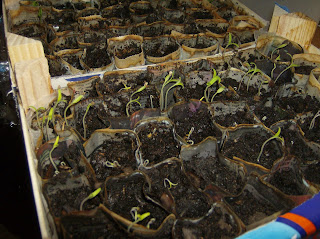 But by growing and sharing vegetables right out of my yard, I bring much needed fruits and vegetables to my street.

I applaud the Obamas for starting their own vegetable garden at the White House. I also think it is great Mrs. Obama insists the First Daughters will be the ones weeding. This will help the girls understand where their meals come from and the work involved in growing the food. But most of all, I thank the family for the wonderful example they are setting.