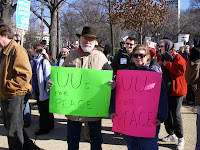 U.S. and Iraqi negotiators are making progress in determining the future presence of U.S. troops in Iraq. Negotiations began in March, with the U.S. proposing an agreement that lacked a timeline for withdrawal and included complete immunity for U.S. troops and contractors. The Iraqis responded by declaring that negotiations were at a dead end. This resulted in the U.S. making some concessions and five months later negotiators appear near agreement on a 2011 withdrawal of U.S. troops. While the agreement is not complete, it marks a definite step towards a new future in Iraq.

The preliminary terms of the agreement are being brought before the Iraqi executive council and will ultimately have to be approved by the Iraqi parliament. Currently there is nothing requiring the U.S. Administration to get approval from Congress for a security agreement. Sen. Biden has introduced legislation that would change that, by requiring Congressional approval of any security agreement with Iraq. [Click here to call on your Senators to join Sen. Biden]

Unitarian Universalists have been praying and protesting this war since before it began. After five years of an immoral occupation, this development offers a flicker of hope for the futures of the U.S. and Iraq.

UUA Advocacy Against the War