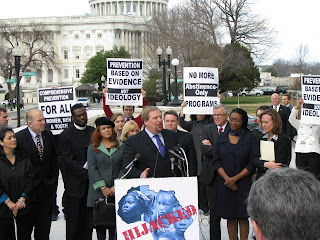 The House Committee on Foreign Affairs has scheduled a markup hearing on February 14th at 9:30 am for Chairman Lantos’ bill reauthorizing the President’s Emergency Plan for AIDS Relief (PEPFAR).

Members of the committee, who are content with the current policies – including the requirement that 1/3rd of our HIV prevention funding to be spent on abstinence-until-marriage programs – hosted a press conference yesterday on the steps of the Cannon House Office Building. Rick Warren, author of The Purpose Driven Life and minister of Saddleback Church in Southern California, flew into DC and spoke at the press conference.

Pastor Warren has been one of the few evangelicals to actively work to end the worst humanitarian crisis of our time. With HIV/AIDS being stigmatized for so long, Pastor Warren’s leadership on this issue has been crucial to opening up the minds and hearts of so many Americans to the suffering this pandemic causes. For three years he has held a Global Summit on AIDS at his church. In 2007 he invited six leading presidential candidates to participate, and Senator Clinton accepted.

Because HIV/AIDS and sexuality can not be separated, Sen. Clinton’s participation resulted in a lot of criticism from pro-life activists who are highly critical of her pro-choice and pro-comprehensive prevention beliefs. Pastor Warren responded by saying, “When millions are dying each year, we’re interested in lives, not labels. We want everyone to become concerned about the AIDS pandemic.”

At yesterday’s press conference, Pastor Warren praised Congress and the current administration for the last five years of unprecedented commitment to ending the spread of HIV/AIDS. He called out for an even broader commitment in the reauthorization of PEPFAR. His message was in the middle of the aisle.

His remarks were preceded and followed by Republicans on the House Committee on Foreign Affairs, who claimed that Chairman Lantos’ draft PEPFAR reauthorization bill had been “hijacked by the radical abortion lobby.” [listen to their remarks here]

While I was not officially invited to join the press conference, I made my way down to the Hill and sauntered up behind Representative Pitts (who originally inserted the abstinence earmark into PEPFAR), Pastor Warren and others as they shared their views on how to end the scourge of HIV/AIDS. As I stood behind those prominent speakers holding a sign that read, “Prevention based on evidence, not ideology,” I was struck by how often they accused our movement to remove the abstinence-until-marriage earmark of being fueled by our own ideology.

To back up our ideology, we have reports from the Government Accountability Office and the Institute of Medicine showing that abstinence-until-marriage programs do not change behavior and do not stop the spread of HIV.

To back up their ideology they have the truthiness that if you tell somebody not to have sex and they do not have sex they probably will not contract HIV.

Along with hundreds of committed activists, I have worked for years to remove the abstinence earmark and open the doors to prevention programs that provide women and youth with accurate information that could save their lives. I am hopeful that Congress will soon reauthorize PEPFAR and remove the earmark and I plan on standing strong (with signs in hand) until this comes to be.

Feeling compelled to find our common ground, I walked up to Pastor Warren after the press conference, still holding my sign, and thanked him for his work to end HIV/AIDS. He smiled and gave me a hug.

With Pastor Warren standing next to Rep. Pitts yesterday and Sen. Clinton two months ago, I suspect that we share one of my deepest convictions: In my journey towards justice, I am convinced that it does not matter which person of power I am standing next to, as long as I am always standing with those millions who are dying each year.