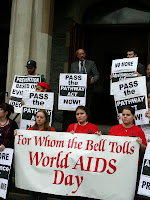 Let’s start with the good news. Our government has approved $48 billion over five years to combat HIV/AIDS, Malaria and Tuberculosis! The law nearly triples the funding level of its predecessor, the President’s Emergency Plan for AIDS Relief (PEPFAR), originally passed in 2003. Along with the $48 billion, the legislation includes new linkages between AIDS and nutrition programs, sets a target of recruiting 140,000 new health care workers, and repeals a travel ban on HIV-positive visitors to the United States.

Additionally, the 1/3rd abstinence-until-marriage earmark has been removed! Five years of advocacy by the Unitarian Universalist Association in partnership with the Center for Health and Gender Equity, Advocates for Youth, National Council of Jewish Women, and many other organizations has finally paid off. In place of the earmark, however, is a requirement that countries must file an explanatory report with Congress if abstinence and fidelity programs fall below 50% of their prevention spending. Fortunately, this is a “soft” earmark in that it does not require that funding be used in any particular way. It is unclear how this requirement will be interpreted and how it will influence the spending decisions of partner countries and the funding decisions of the Office of the Global AIDS Coordinator. But it certainly shows that Congress got the message that the abstinence-until-marriage earmark did not help prevent the spread of HIV/AIDS.

Unfortunately, the shortcomings of the legislation largely effect prevention programs. The law fails to mention family planning or abortion services, an omission that many advocates believe will hinder the integration of those services with HIV/AIDS treatment and prevention. It only briefly mentions intravenous drug users and men who have sex with men, two high risk populations whose specific prevention needs are likely to be unfulfilled. The law also fails to eliminate the current requirement that recipients sign an “anti-prostitution pledge,” which has reportedly discouraged grantees from doing effective outreach programs for sex workers.

As the Legislative Assistant for International Issues working in the Unitarian Universalist Association’s Washington Office for Advocacy, I have spent the last two years advocating for evidence-based, comprehensive HIV Prevention. Reflecting on the passage of this bill, I recognize that our brothers and sisters around the world who are living with HIV/AIDS need more than charitable handouts; they need firm, unshakeable commitment. The U.S. Government has taken a step toward such a commitment by authorizing nearly $48 billion to help combat HIV/AIDS. While I commend our Representatives for this substantial increase in funding, I am disappointed that their policies fail to support fully integrated, evidence-based prevention programs. This legislation fails to address the real life needs of those who are most at risk of contracting HIV, including sex workers, intravenous drug users, and men who have sex with men. Their suffering will be the measure of this policy’s failure. Again, I applaud our Government for its unprecedented financial commitment to HIV/AIDS, but the real victory will come when our HIV prevention programs carry truth to those who need it most.