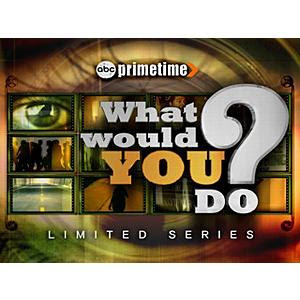 In January, ABC News ran an episode of What Would You Do? that explored racism against Spanish-speaking day laborers.

What Would You Do? explores ethics by secretly filming bystanders’ reactions to staged incidents of behavior such as shoplifting and sexual harassment. The Confronting Racism episode that aired on January 7 examined how customers reacted when a deli worker–a paid actor–refused to serve two Latino day laborers–also paid actors. The (pretend) deli worker referred to the (pretend) day laborers as “illegal” and made a number of racially and ethnically charged remarks, such as, “We don’t speak Mexican here,” in front of (not pretend!) customers.

Over two days, eighty-eight people came into the store while What Would You Do? ran its experiment. Of that number, forty-nine chose not to get involved in the situation.

Nine customers sided with the deli worker–one even offered to remove the day laborers from the store himself. That man later changed his mind after watching from the sidelines as the experiment repeated itself.

On the other end of the spectrum, thirty individuals stood up and spoke out against the deli worker’s racist actions. Some offered to buy the day laborers’ meals, and others asked to speak to the deli worker’s manager. Several vowed not to return to the store.

The fifteen minute video is a powerful and moving conversation starter for how people of faith can honor the inherent worth and dignity of immigrants. For me, it drove home the point that although our opinions about policy and laws are important, when we interact with one another, our faith calls us to regard each other first and foremost as fellow human beings.

“It’s a highly charged, volatile subject with emotions running high on both sides over legal and illegal immigrants and whether they have a right to be here. But when it comes to something as simple as being served a cup of coffee, why should any of that matter?”

Check it out: view What Would You Do?: Confronting Racism in America.