The fourth in a series of blog posts this week inspired by movies highlighted in Sunday’s Oscars Awards ceremony. Today, Lisa Swanson, Legislative Assistant for Economic and Racial Justice, blogs about The Visitor, which received an Oscar nomination for Best Performance by an Actor in a Leading Role. 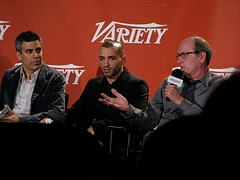 Prof. Walter Vale: Removed to where?

JO: He was deported this morning.

Vale: You don’t think so? What kind of an answer is that?

Vale: You can’t just take people away like that. Do you hear me? He was a good man, a good person. It’s not fair! We are not just helpless children! He had a life! Do you hear me? I mean, do YOU hear ME? What’s the matter with you?

Over the winter holiday I bought a used copy of The Visitor and watched it with my parents. After having heard colleagues talk about the film for several months, it was interesting to finally see it.

The movie is about a college professor, Walter Vale, who finds a young couple squatting in his New York City apartment. Just as Walter’s friendship with Tarek and Zainab is growing, Tarek is arrested for jumping a metro turnstile, and then detained for being undocumented.

Distressed, Tarek’s mother arrives in the city to be near her son, in spite of the fact that she can’t go to see him without putting herself in danger of being detained as well. Walter realizes that, as a citizen, he is the only person close to Tarek who is able to visit him safely. As he goes to see Tarek in the detention center over the next few weeks, his attachment to Tarek and his mother grows stronger–but so does the viewer’s certainty that U.S. immigration policy will soon bring those relationships to an end.

As serious as the movie was, it was refreshing to see a movie that featured undocumented immigrants. Too often immigration issues are relegated to documentaries, which, in spite of being excellent, don’t have a very wide appeal for mainstream audiences. That makes The Visitor an extremely valuable tool for introducing the issue of immigrant rights and immigration reform to folks who might not be tuned into the issue, but enjoy a good film.

The story itself was well-acted and visually lovely. Best of all, the film’s makers are aware that the story of detainment and deportation isn’t just fodder for a good drama, it’s also a social justice issue. They’ve put together a good website – http://takepart.com/thevisitor/ – which offers a discussion guide, information about supporting detainees, and information about relevant legislation.