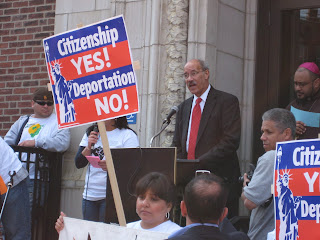 I was so proud to be a UU yesterday as I stood in a crowd of several hundred immigrants from Central America and their allies and listened to UUA President Rev. William Sinkford address the crowd. Bill was surrounded by a group of interfaith clergy as he spoke saying “The Gospel instructs us to ‘Love our neighbor as ourselves.’ We need to ask ourselves, ‘Who is my neighbor”’ and we need to include undocumented folks in our answer.”

The rally was held in Chelsea, MA, a small city north of Boston with a large immigrant population. The Chelsea City Council voted to become a Sanctuary City in June 2007 and is a welcome contrast to the kinds of sweeps we see being conducted by the sheriff in Phoenix and his volunteer posse that keep a count of people they have detained and deported up on their website.

In fact, there is now a campaign in MA called Welcoming Massachusetts aimed at making us the first state to be officially welcoming to all immigrants. President Sinkford was asked to address the rally because of the leadership role the UUA has been taking in that campaign and as the first religious denomination to sign on to the New Sanctuary Movement.

The New Sanctuary Movement was launched a year ago on Mother’s Day weekend (Saturday in Latin American and Sunday in the US & Canada). Forums, vigils, press conferences, film showings and more will be held across the country May 8-11 to mark the anniversary and highlight the continued need to stop the raids and enact humane immigration reform. (Check the website for an event near you). ICE has made over 5,000 workplace arrests this year and extended their reach to Amtrak trains and Greyhound buses. Many cities continue to see raids and hateful rhetoric. However, we are also seeing lots of solidarity. UU congregations are active in the 30 interfaith new sanctuary coalitions across the country.

There will be a statewide forum at the Arlington Street Church (UU) in Boston on May 10th being co-sponsored by the UUA, UUSC, Centro Presente, and MA Interfaith Committee for Worker Justice.

As a staff person who helped launch the UUA’s anti-racism multi-cultural initiative, I am so gratified to see us developing partnerships with the immigrant community. At a time when hateful rhetoric and fear surround the issue of immigrant rights, it is as people of faith that we call for compassion, for keeping families together, for recognizing that we are all children of god. I think we can help build bridges between communities. As the largely Latino crowd cheered Bill Sinkford, an angry white man rushed in front of the stage demanding to know if Bill was from Chelsea. The Imam standing on the stage with Bill came down and took the man by the arm and led him to the side as he talked with him calmly while the crowd chanted “Si Se Puede – Yes We Can!” Bill began talking again about how we are all neighbors. People came up to shake Bill’s hand. And I’m happy to say that several of them were UUs! It was a religious witness we must continue.