This is actually old news, but I just saw a picture of a billboard erected almost a year ago by the Immigrant Justice Advocacy Movement (formerly the New Sanctuary Movement Coalition of Greater Kansas City), and wanted to share it here. Picture credited to KMBC – TV of Kansas City.

Last year, about twenty churches in the Kansas City, Missouri, decided to form a coalition in support of immigrant families as part of the New Sanctuary Movement (NSM). Among these was All Souls UU Church, members of whom were present September 25, 2007, when over a hundred people gathered to announce the coalition.

One UU church member, Angela Ferguson, was quoted by the Kansas City Star as saying, “Our goal is to speak out against making immigrants the scapegoats of all problems. If you can’t get that off the table, then we can’t have a logical debate about how to fix the situation.”

I think the Immigrant Justice Advocacy Movement found the perfect words to convey that message. 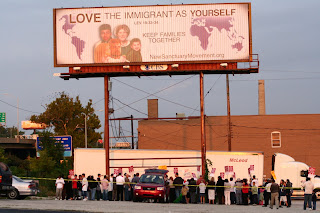 Picture credited to Freddy Rhoads, originally posted at http://nsmkc.blogspot.com/
For more information:
Click here for a Unitarian Universalist guide to the New Sanctuary Movement, or check out our webpages on Immigration at UUA.org.