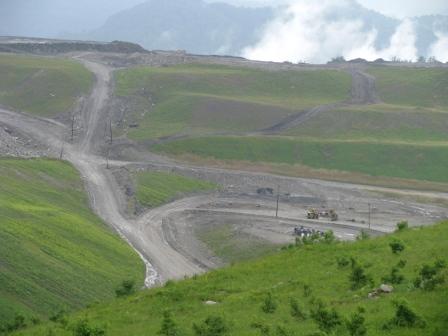 This past weekend, I joined a dozen members of the Thomas Jefferson Memorial Church in Charlottesville, Virginia on a trip to West Virginia to witness mountaintop removal (MTR) coal mining.   On this trip, we visited Larry Gibson on Kayford Mountain and spent time with the UU Congregation of Charleston, WV. The stories we heard were incredibly moving and made me reflect more on the source of our energy and how disconnected we are from it. It is by the grace of coal that I am writing this blog entry right now.

MTR is just one method of mining coal, but it is the most devastating to the land. The land is exploded to make easier access to the coal, and the rubble and byproducts are pushed into valleys and stream beds as “valley fill.” Heavy metals, such as selenium, are exposed and get pushed into the watersheds, causing health issues for people near the mines and downstream. The concentrations are high enough that just downstream from the mountaintop removal mining on Kayford Mountain, fish have both eyes on one side of their heads.

Larry told us that they recently started adding tetrol to the mining explosives. This is a chemical that was banned back in WWII, but the US had stockpiles of it that needed to be depleted. Now, this is in the air and the water people rely on to live.

Who owns the land? How did they get ownership of the land? Why does mountaintop removal coal mining happen, when there are other ways of mining coal that aren’t as destructive to the land, to jobs, and to the health of the people? Why don’t more people know about this, if so much of the country is powered on coal, some of which comes from MTR practices?

I think part of the problem is our disconnection from our resources. Energy comes from so far away, that we don’t see the devastation or feel the effects nearly as strongly from a distance, if we feel them at all. Even so, we our destroying our country’s heritage and some of the oldest mountains in the country. Sacrificing the people of Appalachia to power the rest of the country. We’re seeing this acutely now with the Gulf Coast and oil as well.

I encourage you to read more about MTR. More information can be found on www.ilovemountains.org, which is maintained by Appalachian Voices. In 2006, UU congregations passed an Action of Immediate Witness to End Mountaintop Removal Coal Mining. And before long, the Thomas Jefferson Memorial Church intends to take a show on the road to raise awareness about MTR and move toward action.

May we renew our connection with our planet and extend our idea of caring for our neighbors. May we reduce our energy consumption and raise our awareness about the sacrifices made to fuel our lives. May we move swiftly and as painlessly as possible to a clean energy economy. And may we celebrate and support life for all.