Yesterday was the Earth Day Climate Rally in honor of the 40th Anniversary of Earth Day.  I worked with the Greater Washington Interfaith Power and Light to organize a multi-faith contingency at the rally, bringing together six different faith traditions to celebrate Earth and to cry out together for the need for climate change action.  It was great to hear the dialogue between different congregations and faiths about climate change, how we can be more involved as people of faith, and what’s working/not working for congregations.  I’m inspired to see congregations work together toward real climate solutions.  I was really glad we’d brought postcards and address labels for people to write “and mail” messages to the Senators right at the rally, so that our faith community could send a clear message that climate change is a priority to us and that we want to see legislative action now.

The UUA banner attracted people from near and far!  UUs from at least 10 different congregations came by, from as far away as Portland, Oregon and Littleton, Massachusetts, and from several of the more local congregations in the District, Maryland, and Virginia. 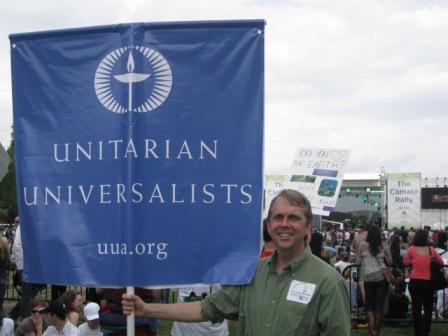 Several more folks came by our banner, saying that they had grown up UU and recently moved to the area and were wondering about how to get involved.  People seemed to appreciate us being there, showing that as Unitarian Universalists, we are called to care for our planet and get legislation passed that makes Earth more livable for all people, both now and into the future.  So all-in-all, we had a good presence at the rally and I’d like to thank everyone who came out for it!

I was frustrated to hear that the Kerry-Lieberman-Graham bill, scheduled to be unveiled today, has been postponed indefinitely.  Senator Graham announced that he will abandon climate legislation if it isn’t moved ahead of immigration on the Senate calendar. 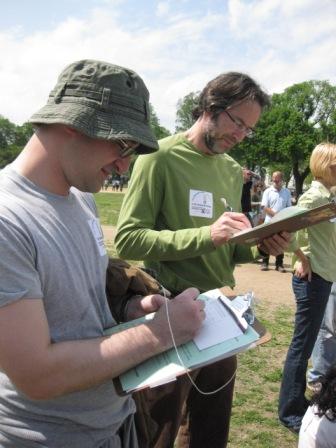 I am particularly concerned that according to a Washington Post article, Senators aren’t hearing that climate change legislation is a priority for their constituents.  Let us make sure they know that climate change is not only a priority for Unitarian Universalists, but it is a moral and ethical imperative that action is taken on climate change.  We are polluting the very planet that sustains us and allows us to live, and the first people to experience the impacts are often the poor and people of color.  Farmers, for example, rely directly on the weather and the earth for growing their crops, and a changing climate impacts their livelihood.  While the changes we can make in our own lives are important,  legislation must be passed to enable the institutional changes necessary to tackle climate change.  Please call your Senators NOW and tell them we need strong and just climate legislation now!