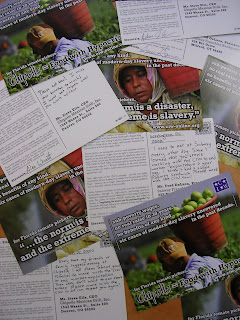 Send an email to the Coalition of Immokalee Workers at workers [at] ciw-online [dot] org to request postcards to mail to the CEOs of Subway and Chipotle!

The Coalition of Immokalee Workers (CIW) has been fighting for justice for the tomato pickers of Florida since 1993. They have achieved enormous victories in forging partnerships with Taco Bell and Burger King, which have agreed to pay tomato pickers a penny more per pound of tomatoes.

A penny more per pound isn’t much for a giant fast food corporation, but to a Florida tomato picker, it can make the difference between exploitation and dignity.

Unfortunately, both Subway and Chipotle have so far refused to cooperate with the CIW. If you would like to add your voice to the call for these companies to pay a just wage, the Coalition of Immokalee Workers will send you postcards free of charge to mail to the company CEOs. 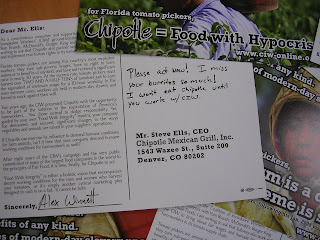 We requested a dozen postcards for the UUA Washington Office, and they arrived just a few days later. Alex, Grace, Kat, Adam and I have added our signatures, addresses, and personal messages, and are planning to drop them in the mail this afternoon.

Below is an excerpt from the printed message on the postcard to Mr. Fred Deluca, CEO of Subway: 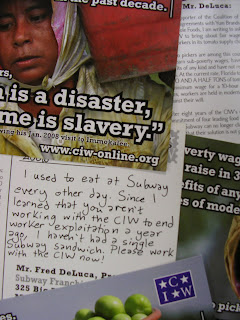 Tomato pickers are among this country’s most exploited workers: they earn sub-poverty wages, have no right to form unions or to benefits of any kind, and have not received a significant raise in 30 years. At the current rate, tomato pickers must harvest over TWO AND A HALF TONS of tomatoes just to earn the equivalent of minimum wage for a 10-hour workday. In the most extreme cases, workers are held in modern-day slavery and forced to work against their will.

. . . After eight years of the CIW’s campaign–and the very public commitment of four leading food retailers to the principles of Fair Food–Subway can no longer claim ignorance of these problems, nor say that their solution is not possible.

To request your own postcards to send, send an email to workers [at] ciw-online [dot] org. Remember to include your address and how many copies of each postcard (Subway and/or Chipotle) you would like to receive.

(If you email photos of your postcards to la_racialjustice [at] uua [dot] org, we’ll post them! Be sure to cover up your home address if you send us photos).