Yesterday my co-worker Kat and I attended an interfaith dialogue on workers’ rights at D.C.’s Jewish Community Center. Christian, Buddhist, Jewish, and Muslim speakers spoke on the theme of “Caring for the Caregiver.”

A woman whose little daughter was possessed by an evil spirit came and fell at [Jesus’]feet. The woman was a Greek, born in Syrian Phoenicia. She begged Jesus to drive the demon out of her daughter. “First let the children eat all they want,” he told her, “for it is not right to take the children’s bread and toss it to the dogs.” “Lord,” she replied, “even the dogs under the table eat the children’s crumbs.” Then he told her, “For such a reply, you may go; the demon has left your daughter.” She went home and found her child lying on the bed, and the demon gone. –Mark 7:25 – 30, New International Version 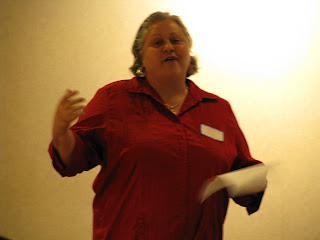 Rev. Noemi Mena, from the National City Christian Church in D.C., shared reflections on a passage from the Book of Mark in which a Greek woman asks Jesus to heal her daughter. Rev. Mena pointed out that the clash of cultures in this story echoes tension over cultural divides between those receiving care and caregivers today.

Like many people in our time who struggle with prejudice, Jesus seems to be put off by the woman’s foreignness at first, telling her, “It is not right to take the children’s bread and toss it to the dogs.” Jesus implies that the woman does not deserve his blessing because of her ethnic origin. When the woman persists in her faith, Jesus heals her daughter.

As a child, I was taught that Jesus was intentionally testing the woman’s faith in this story. But Rev. Mena pointed out that some Christians believe that Jesus “was a man who did not fully understand God’s claim upon him at the beginning.” In this light, the reader sees not the woman, but Jesus being tested–Jesus must struggle with and overcome his own prejudice during this interaction.

With wealth and power unevenly divided along lines of color, class, and national origin, people must work for understanding that bridges cultural divides. “The miracle occurs,” Rev. Mena said, “when we begin to understand.”

In five ways should a master minister to his servants and employees: 1) by assigning them work according to their ability, 2) by supplying them with food and with wages, 3) by tending them in sickness, 4) by sharing with them any delicacies, 5) by granting them leave at times. The servants and employees thus ministered to by their master show their compassion to him in five ways: 1) they rise before him, 2) they go to sleep after him, 3)they take only what is given, 4)they perform their duties well, 5) they uphold his good name and fame. –Sigalovada Sutta 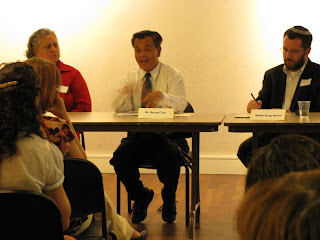 Dr. Sovan Tun, president of the Cambodian Buddhist Society in Silver Spring, Maryland, shared the above excerpt from the Sigalovada Sutta, detailing the responsibilities of an employer and employee to one another.

Dr. Tun stressed the interrelationship of different walks of life. Indeed, this excerpt was particularly interesting to several of the dialogue attendees because it was one of the few scriptures discussed which elaborated on the mutuality of employer-employee relationships.

This idea really rocked my world–especially as an atheist UU who has struggled all year in interfaith coalitions to define the similarity between our denomination and theistic religions. When the commonality between spiritual traditions has more to do with how we relate to one another and less to do with how we do or do not relate to a God or Gods, it opens up many new doors for interfaith work.

Rabbi Greg Harris opened by saying that labor issues are as old as the Torah itself. In the oldest Hebrew scriptures, one sees the concerns of employer and employee. Like Dr. Tun, Rabbi Harris emphasized the mutuality of the employer-employee relationship, which stems from respect for one another. The employer must treat the worker fairly, and the worker must ask themself whether they are “living up to the employer’s obligation back to them.”

Rabbi Harris also spoke about minhag hamakom, “the custom of the land.” This text from the Mishna’s Baba Metzia commands employers to treat their workers according to local standards. To me, it seemed that this injunction related to the Living Wage Campaign, which is based on the idea that anyone working a full-time job ought to be paid enough to be able to afford shelter, food, medical care, 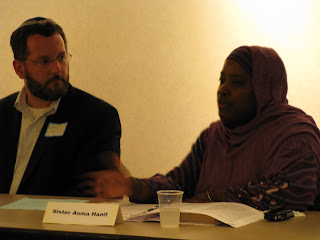 and other necessary expenses in their area. It also reminded me of the struggle for the rights of undocumented workers, who are sometimes underpaid and maltreated by U.S. employers who argue that $3 or $4 per hour is a good wage in an immigrant worker’s country of origin.


Sister Asma Hanif, the Executive Director of Muslimat Al-Nissa, INC, and a member of the Coordinating Council of Muslim Organizations, discussed several ways in which Islam speaks to workers’ rights.

Asma’s first observation was that the two women on the panel–herself and Rev. Mena–both mentioned self-care in their talks, while the two men focused on the employer-employee relationship–which set me to thinking about different ways that men and women may approach workers’ rights.

Sister Asma Hanif also observed that each speaker had mentioned a version of the “Golden Rule,” or ethic of reciprocity, found within their faith tradition. The ethic of reciprocity simply holds that one should treat others as one would like to be treated. The Sahih al-Bukhari Hadith records Mohammed as saying, “None of you has faith unless you love for your brother what you love for yourself.” (I am fascinated by the small variation between this Muslim version of the ethic of reciprocity and the Christian version I grew up with, which is almost identical except for that lead-in: “None of you has faith unless . . .”) Stated in any of a variety of ways, the ethic of reciprocity is a profound injunction to all those who have power over others, including employers, supervisors, customers, and consumers.

Finally, Sister Asma Hanif explained that in Islam, “Your body has rights over you.” For example, “Your body has the right to eat and sleep,” she said. “You have to take nourishment.” Things are designed to keep people from over-taxing themselves; bodies impose limits that each person must respect. It is important to honor the rights of the body, and to make sure that workers who care for others are in turn able to care for themselves.

as a lead up to Labor in the Pulpit/Labor on the Bimah/Labor in the Minbar, which will take place in hundreds of churches, synagogues, and mosques across the United States on Labor Day.

Labor in the Pulplit/Bimah/Minbar is an annual joint project of Interfaith Worker Justice and the AFL-CIO. Last year over 600 churches participated in 52 cities.