This morning I was present at Capitol Hill Park for The Coalition of Immokalee Workers’s signing of the National Petition to End Sweatshops and Slavery in America’s Fields. So were Senators Sanders (VT) and Durbin (IL), Representatives Kucinich (OH) and Conyers (MI), Students United Against Sweatshops, the director of The Robert F. Kennedy Center, and many others.

It was a truly inspiring morning. Speakers recounted the coming together of tomato pickers in Immokalee (rhymes with “broccoli”), Florida in 1993 to protest unjust working conditions and wages. When the growers who employed the workers wouldn’t listen, the Coalition of Immokalee Workers (or CIW) took their cause to the world’s largest fast-food corporation, Yum! Brands, which owns Long John Silver’s, A&W, KFC, Pizza Hut, and Taco Bell. In 2005, after an intense four-year boycott of Taco Bell, Yum! agreed to work with the CIW to improve pay and working conditions for Florida tomato pickers.

As part of the 2005 agreement, Yum! resolved to pay a penny more per pound of tomatoes. According to CIW’s website, “Given that workers today receive roughly 1.3 cents per pound,” or about fifty dollars a day; $7,500 per year, “the raise amounts to an increase of roughly 75% for workers.” In April of 2007, CIW won a similar victory with McDonald’s.

But not every fast food corporation is taking responsibility. Burger King has not only refused to pay workers a penny more per pound of tomatoes, but is actively working to undermine the CIW’s achievements. 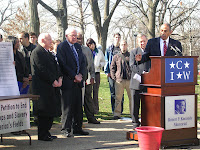 At the Petition signing kick-off this morning, Rep. Conyers said that he had just placed a phone call to Burger King’s CEO, John Chidsey, and left a message about Burger King’s refusal to pay Immokalee workers fairly. “John, wherever you are,” Conyers said to the press cameras, “return my call. I’m in the phone book.”

Senator Durbin declared, “The tomato on my hamburger is not worth the indignity that the workers of Immokalee must face every day.” And Rep. Kucinich stated, “The Civil Rights Movement is not over; it begins again today, and we need the help of American consumers.” Finally, Lucas Benitez, a farmworker and co-founder of CIW, spoke about the strength of consumers, workers, politicians, and companies standing in solidarity. “Juntos,” said Benitez, “somos más fuertes que Burger King.” Together, we are stronger than Burger King.

As the ceremonies wound down, I spotted a woman wearing a clerical collar in the crowd and went up to introduce myself. The woman turned out to be Reverend Noelle Damico, who has led the Presbyterian Church USA’s Fair Food campaign. The Presbyterians have done some amazing work around this issue, and their website features a great Burger King Campaign FAQ.

I left the petition signing inspired and disturbed–and if you’ve read this far, I hope that you’re feeling the same way. I am disturbed that Burger King, Wal-Mart, Subway, and Costco are contributing to the oppression of workers in the United States. But I am inspired that so many people are mobilizing around this issue. I hope that many Unitarian Universalists will support the CIW’s fight for justice.

In conclusion, here’s what you can do:

And finally, tell your friends! Heck, tell your acquaintances, and strangers, too. The farmworkers of Immokalee are counting on us. Now is the time to stand with CIW–and to prove that, together, we are stronger than Burger King.