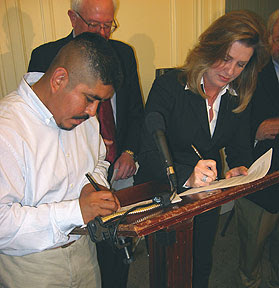 The arc of the moral universe is long, but it bends toward justice. 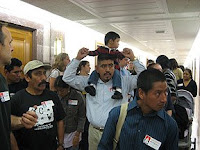 The agreement with Burger King was a victory achieved by many years of hard work on the part of the tomato pickers of Immokalee and their allies. In their eight-year fight to end unjust working conditions and poverty wages, CIW forged agreements with Yum! Brands and McDonalds in 2005 and 2007, respectively, in which the fast food companies agreed to pay a penny more per pound of tomatoes. This small increase in price represented an enormous increase in wages for the tomato pickers. But by the beginning of 2008, other fast food companies, including Burger King, Subway, and Whole Foods (yes, really–Whole Foods), still hadn’t budged towards the side of just compensation.

This spring, CIW intensified their campaign to urge Burger King to pay workers a just wage–just a penny more per pound. In March, I attended an inspiring rally at Capitol Hill Park, where Senators Sanders & Durbin and Representatives Kucinich & Conyers signed CIW’s National Petition to End Sweatshops and Slavery in America’s Fields. As the petition gathered signatures, the pressure on Burger King built, and in April, the Senate held a hearing on farmworker exploitation in Florida tomato fields. And this Friday, May 23rd, Burger King signed an agreement to not only pay an additional penny per pound, but to also reimburse the tomato growers for incremental payroll taxes and administrative costs incurred by the tomato pickers’ farmworkers’ increased wages–a total of 1.5 cents per pound of tomatoes.

Now Burger King is joining the CIW and other fast-food industry leaders in calling for an industry-wide net penny per pound surcharge to increase wages for Florida tomato harvesters. But the struggle is far from over.

Lucas Benitez, a member of the CIW, spoke through an interpreter at Friday’s press conference about the challenges ahead, saying, “Dr. Martin Luther King said it best when he said, ‘The arc of the moral universe is long, but it bends toward justice.’ Social responsibility in this country’s food industry is inevitable, and though the exploitation of Florida’s farmworkers remains unconscionable today, company by company we are building a path toward justice. The next steps are up to those companies that stand before us in the road ahead.”

Specifically, Benitez cited Chipotle, Whole Foods, Subway, and WalMart as companies that must step up and commit to paying a just wage for Florida’s tomato pickers. “To all of you,” Benitez said, “who have marched with us, organized petition drives with us, prayed with us, and struggled with us, today is a day to celebrate this hard-fought victory. Tomorrow, with renewed energy and purpose, we begin our work again to make respect for fundamental human rights in Florida’s tomato fields truly universal.”

For more information about the Coalition of Immokalee Workers and to find out how you can support their campaign for justice, check out their website at http://www.ciw-online.org/. 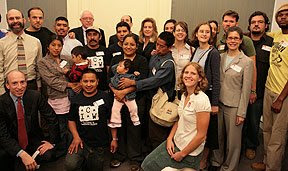