Today we celebrate the anniversary of June 19, 1865, when Union soldiers landed on Galveston Island in Texas, bringing news that the Civil War had ended and those who had been enslaved were now free. Below is the oldest known photograph of Juneteenth celebrations, taken in Austin, Texas, in 1900. [PICA 05476 Austin History Center, Austin Public Library]

And ye shall know the truth, and the truth shall make you free.
–John 8:32 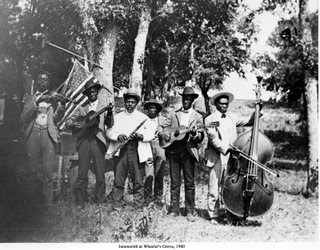 The truth shared in 1865 that freed the slaves on Galveston Island was a simple on update on political events and policy by today’s standards. Today, one can hardly avoid receiving constant political updates from television and online news media. Yet, almost a century and a half later, we still celebrate General Granger’s reading of General Order No. 3 on June 19th. The power of the Juneteenth news came from its embodiment of a long-denied deeper truth: that all people possess equal worth and dignity, and slavery is morally wrong.

This Juneteenth, I want to lift up modern day truth-tellers, whose words and work aspire to correct misconceptions that continue to create inequality in our nation.

History, as it is taught in our public education system, represented in the news media, and understood in common United States culture, often omits European Americans’ misdeeds and people of colors’ achievements in ways that disempower all of us. But some are working to bring to light historical facts that every American should know. One of the most famous is James W. Loewen, (a Unitarian Universalist) whose 1995 book Lies My Teacher Told Me: Everything Your American History Textbook got Wrong, busted myths and condemned our school system’s distortion of American history to favor European Americans. His most recent work, Sundown Towns: A Hidden Dimension of American Racism, brings to light the widespread 20th century practice of towns officially excluding people of color.

Like Loewen, Katrina Browne is a powerful new voice for setting the record straight on race & racism in the U.S. Her new documentary, Traces of the Trade: A Story From the Deep North, chronicles her family’s exploration of their Northern ancestors’ involvement in the slave trade and how their family continues to benefit from that involvement. Her cousin Thomas Norman DeWolf wrote an associated book, Inheriting the Trade. Both works reveal the North’s often over-looked complicity and direct involvement in slavery.

In Congress, Representative John Conyers (D-MI) has been advocating since 1989 for the federal government to undertake an official study of the social, political, and economic impact of slavery on our nation. He has reintroduced the same bill, H.R. 40, for almost twenty years, and has pledged to continue to do so until it is passed into law. In December, H.R. 40 received its first-ever Congressional hearing. Present at the hearing were representatives of the Episcopalian Church, who in 2006 passed a resolution directing all dioceses to “document instances where the diocese has been complicit in and has benefited from the institution of Trans-Atlantic Slavery.”

So here’s to all the truth-tellers–Loewen, Browne, DeWolf, Rep. Conyers, the Episcopalian Church, UUs who have championed and carried out the UUA’s Truth, Repair & Reconciliation Responsive Resolution of 2007, OWL instructors, the health teacher at Fort Herriman, Utah, who has been suspended for answering students’ questions about sex, Media Matters, the Coalition of Immokalee Workers, and all the rest– We need and appreciate your work, and a very happy Juneteenth to all of you.