In 2008, the UUA filed two resolutions on Gender Identity Non-Discrimination: both companies already had sexual orientation in their policy but this resolution asked to include gender identity in its written equal opportunity non-discrimination policy.  6% of Wal-Mart shareholders and 16% of Verizon’s shareholders voted in favor of this protection for their employees.

The 2009 Shareholder Advocacy season saw 12% of Wal-Mart shareholders vote in favor of the same resolution. Progress…but I think back to the 2001 proxy season…when Home Depot changed its written policy prohibiting discrimination based on sexual orientation because of the efforts of the UUA endowment’s shares of Home Depot stock. Management had a change of heart after the proxy statements went out, and called the UUA…saying they had considered the negative reaction from their employees who had learned that Directors did not support the resolution. Terms and conditions were agreed on, and the UUA withdrew the resolution.

This is what shareholder advocacy is all about! Change that comes through management’s awareness of how their written policies affect the people that work for them. When management “gets it” through dialogue, discussion and diplomacy, everyone wins. Why does Wal-Mart gladly take dollars from customers without regard to that person’s gender identity, but stops short of giving their employees the dignity and rights that they deserve?

Why did the largest employer in the U.S. not get it…that the employees who gave so much to the success of Wal-Mart, deserved to know their employer “affirmed and promoted the inherent worth and dignity of every person?” Why would adopting a policy that gave employees a way to resolve conflicts through corporate channels not make sense?

With the history of previous UUA filings and my 18 months as a member of UUA’s Committee on Socially Responsible Investing, I drove the 2 hours from Tulsa Oklahoma to Fayetteville, Arkansas, to see, firsthand, what I knew was going to be a cross between a high school pep rally and a rock concert. I was going to present the UUA resolution that said how we interpret our gender identity, was our right, not a privilege extended to us by our employer.

The Wal-Mart staff member that helped me get settled, Beth, was as friendly and helpful as the other Wal-Mart folks. As the Annual Meeting kicked off, Jamie Foxx’s message was that Wal-Mart was an advocate for the working people; “You help people save money so they live better lives.” As Josh Groban, Mariah Carey, Enrique Inglesias, and Mary J. Blige performed in between the business parts of the meeting, the message was that these associates have had their lives transformed by this company. 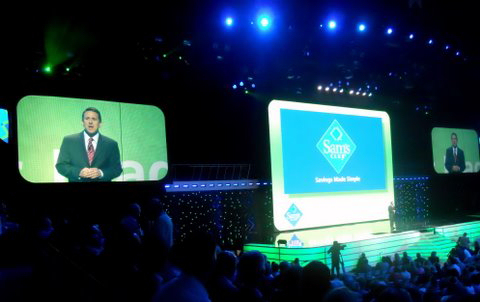 What remains, after the laser light show and the echoes of, “I can kiss away the pain” was as usual, the people that are affected by the work the UUA is doing to move the endowments of congregations all over the country in the direction of our values. Beth, my Wal-Mart guide, asked what the resolution was all about. She nodded as we talked about the fact that you should not be fired for the way you present yourself…for how you look, or dress. Being disciplined, reassigned, fired or not promoted because of who you were and how you looked…not how you did your job…was not right.

After I used the three minutes allowed to present the resolution asking Wal-Mart to extend these rights to their associates I received a polite applause, and took my seat. I felt a hand on my arm…and turned to meet John Wright, a minister at the UU Fellowship at Salisbury Maryland who works at Wal-Mart. With tears in his eyes, he thanked me for being there. He was overwhelmed by the emotions he felt as he heard that the CEO of his company announce that the UUA was presenting this resolution. The faith tradition he was devoted to had moved into his workplace, to model the values that we have come to take as second nature. He kept thanking me, and thanking the UUA for doing this work.  This work matters. It changes people’s lives. It allows the people of this country to be a part of changing how corporate America does business.

In the end, we received 14.6% support from shareholders…small, but moving in the right direction.  The Walton family has 45% of the stock, so until they move on this resolution, we’ll keep filing each year.

All of us…our children and grandchildren, will live in a better world because of the work the UUA does.

Julie Skye is a member of All Souls Tulsa, the UUA’s Committee on Socially Responsible Investing, and is a Registered Investment Advisor. She acts as a Family Back Office to 85 families and helps them organize, manage and co-ordinate all aspects of their financial lives including tax, estate and retirement planning. She has been doing pro-bono work with Foundations and non-profits for two decades and sees the connection between SRI and Social / Racial Justice.  Passionate in her belief that’ we can do well, while we do good’, she is Vice Chair of the All Souls Endowment Committee and offers seminars at the Sunday Emerson Forum titled “The Free Church Financial Forum.”