On Tuesday, we offered a round-up of articles on housing recovery in the Gulf Coast in advance of Wednesday morning’s Congressional hearing on FEMA housing. Last night, the Associated Press posted coverage of the hearing, which began with the words: “The government could end up repeating mistakes seen after Hurricane Katrina without a better plan for housing people after a catastrophe . . . .”

One of the main problems that FEMA officials pointed out included that the housing they provide is meant to be temporary– and without federal or state governments stepping in to facilitate peoples’ return to permanent housing, FEMA is having to provide a service it simply isn’t equipped to provide.

“Our business is sheltering … we do not have the solution for how we re-establish housing stock,” said Craig Fugate, Director of FEMA (Federal Emergency Management Agency).

FEMA is also restricted from spending a significant amount to repair permanent housing. According to Richard Skinner, FEMA’s Inspector General, FEMA is “hamstrung by federal laws limiting its role in the broader rebuilding effort.”

FEMA surely has its share of responsibility in the problems that have followed Katrina and Rita, but their testimony at yesterday’s hearing makes it clear that rebuilding and long-term recovery is a greater task than they were ever equipped to handle.

The House Committee on Homeland Security will hold a hearing on FEMA Housing: An Examination of Current Problems and Innovative Solutions tomorrow, Wednesday July 8, at 10 am EST in Washington, D.C. The purpose of the hearing is to receive testimony on FEMA’s strategy and plans to provide displaced individuals interim housing options in the wake of future catastrophes. Footage will be available on the House website, where an icon for live/recorded video of the hearing is located at the bottom of this page.

With regard to housing recovery in the Gulf Coast generally, a coalition partner at the National Low-Income Housing Coalition compiled this list of recent news articles:

· FEMA estimates that 1,800 individuals or families in Montgomery County, Texas, with unmet needs after Hurricane Ike just began to provide the needed resources.

· The City of Galveston expects to get the money for its housing recovery plan by August. Unfortunately there are lingering concerns that many people who could have received the assistance already rebuilt their homes, through a variety of resources, and will now not qualify for the funds.

· A Biloxi news piece talks about the progress of two rebuilding programs, “My Home My Coast’ at Gulf Coast Renaissance Corp and ‘Coming Home Collaborative’ with the Gulf Coast Community Foundation. The two programs combined have already received more than 5,000 applications.

· George County supervisors approved “a comprehensive plan … to guide development for the next two decades” last week. The process to develop the plan began after Katrina when officials learning they could not stop FEMA trailer parks from being located in areas that they or neighbors did not want them.

· The Louisiana Weekly reports that HANO extended the deadline for people on the pre-Katrina public housing waiting list to respond to requests as to whether they would like to stay on the list. The deadline for such notification had been last Friday, June 26, but has been extended to this Friday, July 3.

· More construction begins on homes to be built on former C.J. Peete site in New Orleans.

· This Times-Picayune piece talks about the progress on the long-delayed Louisiana Katrina cottages.

· Footage of Bill Johnson, ADECA, testifying before the House Financial Services Committee concerning the Economic Disaster Area Act of 2009, which proposes a new set-aside of CDBG funds for states declared economic disaster areas by the President. Around the 59 minute mark, Rep. Waters responds to Johnson’s ask for more disaster CDBG funds agreeably and, though she doesn’t offer anything concrete, suggests that the committee revisit the unmet Gulf Coast housing needs and what has happened with previous funding.

· Recently the UN special rapporteur on racism spoke before the UN Humans Rights Council about recommendations for how the US can tackle ongoing racial discrimination. Discriminatory treatment of people affected by Katrina, especially with regard to permanent housing situations, was included in that testimony. See the UN recommendations.

· An MIT team transformed a FEMA travel trailer into a mobile community garden. The “Armadillo” is now on a cross country trip.

Yesterday, faith leaders and people of faith gathered at the Episcopalian Church of the Epiphany in Washington, D.C.–just a few blocks west of the UUA Washington Office for Advocacy, and a few blocks east of the White House–to pray and witness for comprehensive immigration reform.

The interfaith press conference and vigil had originally been scheduled to coincide with a White House summit on immigration with Administration and Congressional leaders. But late last week, the date of the summit was pushed back–for the second time. The bipartisan summit was scheduled initially for June 8th, then rescheduled for Wed. June 17th. Now, there’s no certainty about the new date. Organizers of yesterday’s vigil, who included Reform Immigration For America and the Interfaith Immigration Coalition, decided to continue as planned, in spite of the summit’s shifting date.

After the vigil’s conclusion, faith leaders and attendees proceeded to the White House for further prayer and witness. Watch the video above to see reflections on immigration reform from Unitarian Universalist minister Rev. Nancy McDonald Ladd, who has been involved in immigrant justice work in Manassas, Virginia.

“I am moved by my faith as a Unitarian Universalist to be engaged in this work along the border. It’s an important social justice issue to be in solidarity with the courageous people who leave so much behind to try and build a more dignified life for themselves and their families.” –Walt Staton

Today marks the beginning of the federal trial of Walter Staton, a Unitarian Universalist who provides humanitarian aid to migrant border crossers as a volunteer with No More Deaths, an official ministry of the Unitarian Universalist Church of Tucson. Staton is being charged with knowingly littering after putting out jugs of water intended for migrants crossing remote areas of the Sonoran desert last December on Buenos Aires National Wildlife Refuge.

Dehydration is often a factor in deaths that occur along the border. Approximately 20 bodies of migrants have been recovered from Buenos Aires since 2002, with many more deaths occurring just outside the refuge’s boundary. No More Deaths volunteers distribute water jugs throughout the refuge in order to prevent deaths by dehydration, and they routinely pick up trash they find on the refuge. When Staton received his citation for littering, the group of volunteers he was with was carrying out empty water jugs and other trash.

The trial is expected to last most of the week.

“When we talk about immigration, there are always theological questions lurking just under the surface of our usual arguments. Here are some:
Is it moral to exclude people from this country?
Is it moral for a country to defend its borders, and if it is, why is it moral?
Is it ever right for a group to band together and keep out others who “don’t belong”?”
—excerpt from “Family Across Borders,” by Rev. Laura Horton-Ludwig

This Mother’s Day, Rev. Laura Horton-Ludwig of First Unitarian Universalist Church of Stockton, California, preached on the theology of immigration. After sharing a story from her own family’s experience and contemplating the theological questions behind how we approach immigration, Laura closed her sermon by explaining HR 182, the Child Citizen Protection Act, and encouraging members of her congregation to fill out postcards to their representative asking them to co-sponsor the Child Citizen Protection Act.

Read Laura’s sermon, Family Across Borders, and then send your own message to your representative through our online action campaign.

The Child Citizen Protection Act would allow immigration judges to take into account the well-being of a U.S. citizen child when determining if their non-citizen parent should be forcibly deported. The bill would offer hope to families which include include at least one non-citizen parent and a U.S. citizen child—which make up 15% of all families in the United States.

The Unitarian Universalist Washington Center houses the UUA’s Washington Office for Advocacy, Identity Based Ministries, and Holdeen India Program, as well as Shelley Moskowitz, the Washington representative of the Unitarian Universalist Service Committee. Once a month we get together and have a Washington center meeting and potluck to celebrate the birthdays that month. Today, we celebrated the birthdays of Lisa Swanson, Legislative Assistant for Racial and Economic Justice, and Adam Gerhardstein, Acting Director of the Washington Office. To celebrate, Alex Winnett, Program Associate for Peacemaking, baked a cake that can only be explained by the pictures below. Enjoy! 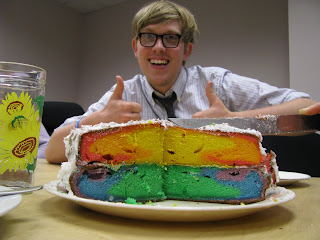 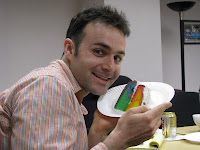 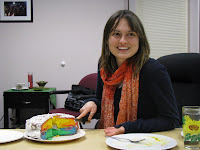 Lisa (Birthday Girl)
Here’s how you bake the cake!

Unfortunately, I fell asleep before Stephen Colbert interviewed Sheriff Joe Arpaio on The Colbert Report this past Monday night, but Alex and I watched a clip of their conversation online this afternoon.

Over the course of a seven minute exchange in which Colbert did most of the talking, the discussion touched on law enforcement, racial profiling, and the border wall. Sheriff Arpaio responded to Colbert’s questions clearly and professionally, and even with a certain measure of grace–especially in light of the fact that a crowd of picketers was outside the building, protesting his treatment of undocumented immigrants.

Watching the interview, it was obvious that Sheriff Arpaio possesses a great deal of knowledge, experience, and passion for law enforcement. But I was troubled by how the pragmatism of his answers glossed over the human costs of his immigration enforcement practices.

For example, when the conversation turned to racial profiling, Arpaio said that identifying undocumented immigrants on sight is “pursuant to [his and his officers’] duties” in enforcing immigration laws. And while that may seem on the surface like a logical answer to the question asked, for me it misses the point.

Arpaio’s response, though calm and seemingly logical, left unacknowledged the suffering that his methods have created in immigrant and Latino communities by spreading fear and dividing families.

We need strong law enforcement, but first we need to be sure that the laws that we’re enforcing are good–that we have policies that work. Currently, our immigration policy is overwhelmingly broken. Enforcing broken laws is dangerous as well as ineffective.

We need pragmatism in our law enforcement, but our pragmatism absolutely must be anchored in compassion and respect for the inherent worth and dignity of every human being.

Watching the interview reaffirmed my belief in how important it is that Unitarian Universalists practice advocacy. The compassionate perspective is so very important, and that’s what we, as people who value both human diversity and interconnectedness, bring to the table on issues of social justice.

What do you think? Please feel free to share your comments and reflections on the video here. 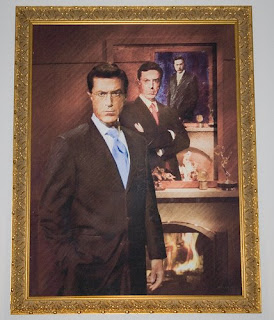 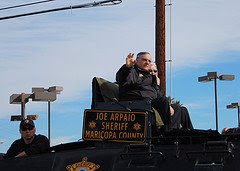 I might have to stay up past my bedtime. 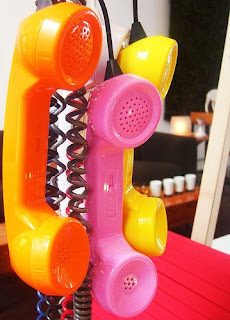 In the latest of a string of experiments in finding new ways to connect and inform the UU immigrant justice community, the UUA Washington Office for Advocacy is hosting a conference call this Tuesday, April 21st, from 4 to 5 PM Eastern Standard Time. The call will briefly cover:

* Legislative developments
* May actions including May 1st and the May 12th Day of Remembrance
* May 2009 Action of the Month: Crash Course for Immigrant Justice materials
* The new UUA Immigrant Justice presence on Twitter, Delicious, and Facebook

To participate, send an email to lswanson [at] uua.org. I’ll email you the call-in number, access code, and agenda on Tuesday morning.

First there were webpages.

–And last but not least, a new Facebook group called Another Unitarian Universalist Acting for Immigrant Justice on May 1, 2009.